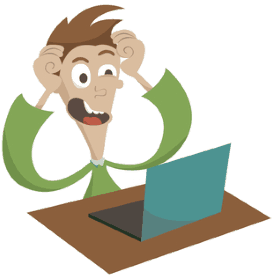 Year 6 students about their school 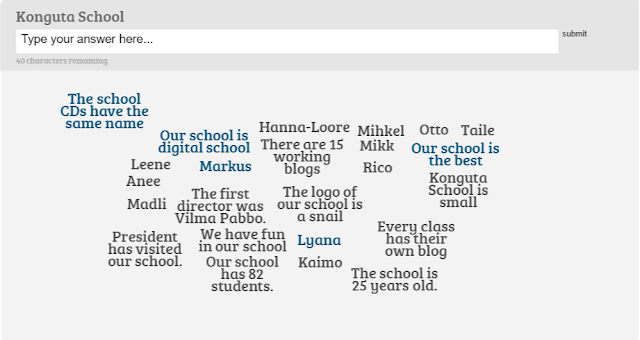 WHAT WE HAVE DONE

A while ago there was a small village. This village had lots of nicknames: haunted village, scary village, terrible village and even death village. There was a legend about the village.
A twenty-membered group went for a hike. They took a rest in the village. But the group never went further. Some farmers around the village heard  screams and noise. They went to see what's going on. As closer they got to the village as stranger went the air. When they were by the village, suddenly something threw them down. They ran quickly away. Something strange happened there, but nobody knows what. The next  day the farmers went to the village, everything was thrown around and people were gone.
The farmers thought that a devil took them away. This legend was written by one of the farmers. Nowadays the village is abandoned, everybody fears the legend.

This story happened for a long time ago when dark witches ruled the Earth but in secret.There was a family that wanted to move near the dark woods where witches lived without knowing about it. The family really liked the house so they bought it.The family had two kids named Eve and Flynn. They were only 13 years old. The children went to the dark forest to play hide- and- seek. Eve was hiding and then she spotted a tree covered with spider web and then she heard someone breathing behind her. She turned around and saw a scary witch with red eyes and a long nose. The witch took her into the house. Few days passed and the family went looking for thir daughter. They found the house and the witch took them into the house. The family asked why the witch was doing this. The witch answered: “What question is that!  For power, of course! The biggest power in the world.To get your strength and your smartness.”
With these words the witch  turned into blood moon by taking humans power and strength.

This story happened about four years ago. Me and my friends were breaking into some old abandoned houses. We went into three houses. The last house was a big mansion.
When we got in, the first thing we noticed was a big poker table. Everything was covered with dust and spider`s webs.  A lot of things were under big white blankets and there were no carpets on the floor. We looked around in the house.
Suddenly we heard a scream from the top floor. We ran upstairs and there was a big white ghost looking at us - we were all shocked. When we looked around we didn´t see one of us.  One of my friends started running downstairs and we all followed him. The white thing followed us as well. I jumped out of the window into a pool. My friends were still inside.
I  waited for them in the bushes, then they came out running for their lives. We ran home and told our parents about it but nobody  believed us.
I was grounded for two weeks because of that. But when the boy went missing, my parents believed me. We never go to any old houses anymore.

A mother and a father planned the date but they have a two -year- old baby and they needed a babysitter. They called the babysitter  and she came to their house. Parents left and the babysitter  started to work. The babysitter didn’t w the baby. The baby was running around in the house but she ran into a burning candle. And then the house burned down with the baby and the babysitter. When parents came home they are very frightened their home is in fire. Mum started to cry because the baby is dead and babysitter too. After two days they moved to another house, that house is old but they didn't have a choice because they don't have a lot of money, but no one knew that house is haunted. The ghosts was the babysitter and baby, who wanted to show the place where they died.

This story happened for a while ago. One evening I was hanging out with my friends. We were just walking around and talking. We walked to our local store. It was about 9 o’clock, but the store was opened until 10 PM. We bought ourselves some ice cream and kept walking. We walked to the centre of our village. We split there. Our houses were all on different directions, so we all started walking home. It was kind a dark outside. There were some street lamps, but they didn’t light the place up so well. I had to use a flashlight. I was walking home and I felt like someone was watching me. I heard footsteps right behind me, but when I looked back, there was nobody in there. That made me nervous. I started to walk quicker. I heard whispering behind me, but again there was nobody in there. I started running towards my house. I looked back and saw  someone. It wore grey pants and a black hoodie that covered its face. It started to walk towards me really quickly. I started running again and made it to my house. I was home alone. My parents were in town and they didn’t come until 11 o’clock. I immediately locked the door and pulled down the curtains.
A few minutes later I heard a doorbell. I was so scared and didn’t do anything. I was sitting on a couch and then I heard a strong knock from the window behind me. It said my name and told me to come outside. It went to the door and I looked at it through a peephole. I opened the door. The figure took off the hoodie and it was no one else than one of my classmates. He showed me a wallet and said that he saw that I dropped it, but he was a bit shy to run up to me and give it to me.
So that’s how the spooky story happened.

This story  happened quite a long time ago. One day when the weather was terrible, it was raining and thunder was striking,  the stepmother asked her stepchild to go to the forest and search a flower charm. “How shall I go? The weather is terrible”, said the stepchild but the stepmother didn`t listen at all.
Five minutes later the stepchild went to the forest. The forest was scary and dark and stepchild was afraid. She didn’t know how does the flower charm look like. Suddenly she saw a light far away and she started to run towards the light. When she came up to the light she was in trouble. The light was in the house that was dilapidated. The girl wanted to know what  light was it in this house. She went to the house. There was a long long corridor and at the end of it was a door. The girl walked towards the door and opened this. She saw a ghost in front of her. It was a zombie. The girl was scared and  ran back along the long corridor and when she wanted to open the door, it didn’t open. Next to the door there was a stair and the girl ran down the stairs but somebody just pushed her and she fell. When she tried to stand up she saw the ghost in front of her again. But she didn’t see an exit and she died. After that the house disappeared in the forest.

I found a recording, but its beginning was missing. The tape itself looked pretty weird and now I´ll try writing it down.
The tape started with a talk of five high school students about a group project. The project was to make a movie about some kind of building. I found that out later. They wanted to go and make a movie in an abandoned hospital. They went inside and right in the beginning you can see a ghost running away. Then they probably stopped to watch the tape, because it pauses there for a second.
They kept on going deeper into the hospital. It seems like the hospital is endless. Once they stopped and turned back they reached the door but it was closed. They eventually got the door open but the world they entered was not usual. They saw a big monster with horns and huge claws which could tear apart a cow -like thing.
The children went back into the hospital and saw a ghost again. This time it whispered something that sounded like, ”They´ll come and then we are going to have a feast with Johnny!´´ After that there was a creepy laughter and they tried to catch it but it ran away. The children fell into a hole and the camera pauses for a second….. but they´re out of the hospital.
I discovered that when they started to fall the ghost looked at them with a creepy smile and whispered,”You´ll be back, want you it or not!” There was no laughter this time.
The students went to bed and found out that they had been in the hospital for a year. One of the  boys started the recording in a dark room and said he knew the thing would get them and take them back to hell. There was another pause in the video and it started when  one of those things was holding the camera and just filmed them while they were sleeping.
There was about five hours of that and I just skipped it. At the end of that part the ghost turned to the camera with its sick smile and deformed face and whispered, “See what Johnny´s feast and then ran away they just couldn´t close their eyes!´´  And when he stopped speaking the big monster whose eating they saw before came and dragged them back into the hospital. The recording started with them sleeping and when they woke up they looked into the camera and said with a really weird and creepy tone, “ Come get us and you`ll die, don´t come get us and we`ll die of pain and you´ll see it in your dreams for thirty three days.´´
That´s where the recording ends. I gave the recording to the police and two of their officers went missing in the hospital.